The Investigation Department of the Ministry of Public Security pursued and arrested Tran Bac Ha, the former chairman of the Vietnamese Investment and Development Bank of Vietnam (BIDV). On November 29, 2018, the Department of Public Security Investigation Police Directorate (C03) executed and executed an arrest warrant, searching for 04 defendants involved in the Violation of Banking Regulations, other banking-related activities, held in Vietnam Bank Development (BIDV). On November 22, 2018, the Ministry of Public Security Investigation Police Department (CO3) decided to initiate criminal case No. 46 / C03-P13 based on the results of the investigation and the evidence collected. “Violation of the rules of banking activities, other types of activities related to banking activities” occurred in BIDV Bank; On the same day, the decision to prosecute the accused, a search warrant:

With regard to the crime “Violations of banking regulations and other activities related to banking activities”, as provided for in Article 206 of the Criminal Code of 2015, and the application of measures to prevent the arrest of the accused for temporary detention in custody 03 defendants Tran Bac Ha, Tran Luc Lang and Ky Dinh Hoa; Apply preventive measures to prevent departure from the house for the accused Le Thi Van An.

After the Supreme People’s Prosecutor’s Office approved the aforementioned Decisions and Order of November 29, 1818, the Police Investigation Agency of the Ministry of Public Security (C03) executed the decision and executed the arrest warrant. , inspection 04 people in accordance with the law.

Currently, the Police Investigation Agency of the Ministry of Public Security (C03) urgently investigates and restores the property for processing in accordance with the law.

Earlier, at the 27th meeting of the Central Inspection Commission (end of June 2010), the agency carried out disciplinary measures, issuing the Party to Transu Bac Ha, the former party secretary, former president of the Board of Directors of BIDV.

According to the Central Inspection Commission, by checking when the Standing Committee of the BIDV Party Committee for the period 2010-2015, 2015-2020, found signs of a violation. Violated the principle of centralized democracy; lack of responsibility, free leadership, direction, management, lack of supervision and oversight, so that BIDV has serious systemic violations in the implementation of working rules, decentralization of authority provisions and the procedures and procedures for granting credit, causing very serious consequences, increase bad debts, especially debts that can lose capital; for many officers, party discipline and state law are violated; they are criminalized; Reduce budget revenues, affect business results, income, employment and the standard of living of BIDV employees.

Mr. Tran Bac Ha, former party secretary and former chairman of the board of directors, is responsible for the main violations of the Standing Committee of the Party Committee for the period 2010-2015, 2015-2020. He violated the principles of democratic centralism, working rules, manifestations of imposition, lack of democracy in leadership and management; Violation of the decisions of the Standing Committee of the Party Committee on the obligations and duties of persons holding positions in the BIDV system; Violation of procedures, procedures, authorities, loan regulations in approving guidelines, decisions on certain loans, guarantees, investments and debt management, including approval of guidelines for a VND of 4.7 billion billion. For 12 companies involved in a construction bank.

The infographics on Mr. Tran Bac Ha from the process until the Central Commission of Inquiry did something wrong: 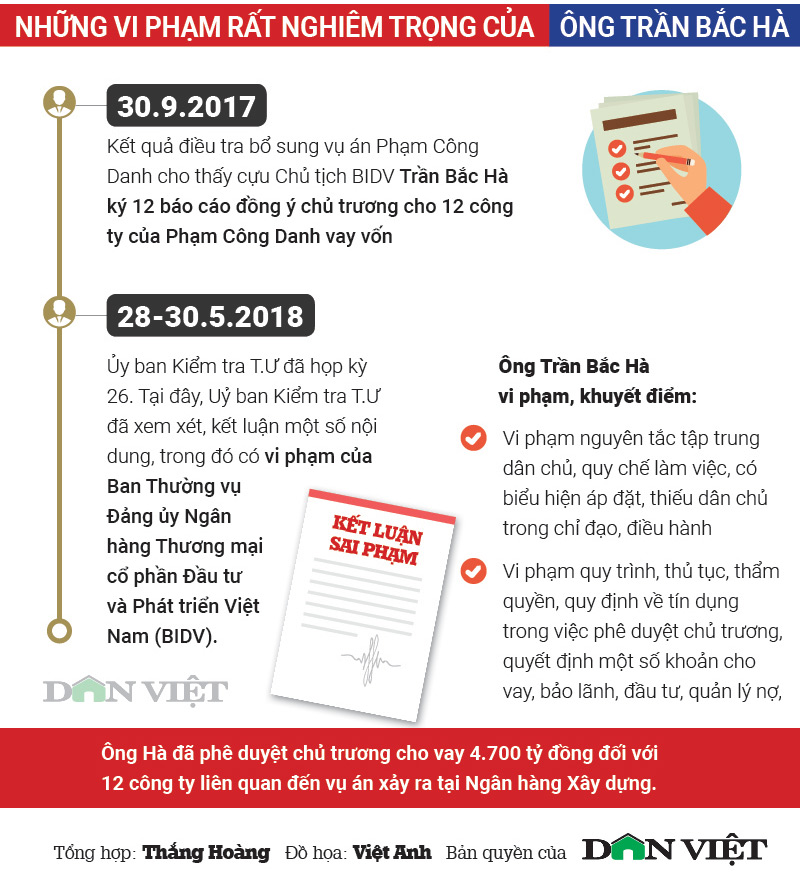 On the afternoon of June 30, the Central Verification Commission checked the discipline of the expulsion of the party against the former chairman of the bank, Mr. Tran Bac Ha.