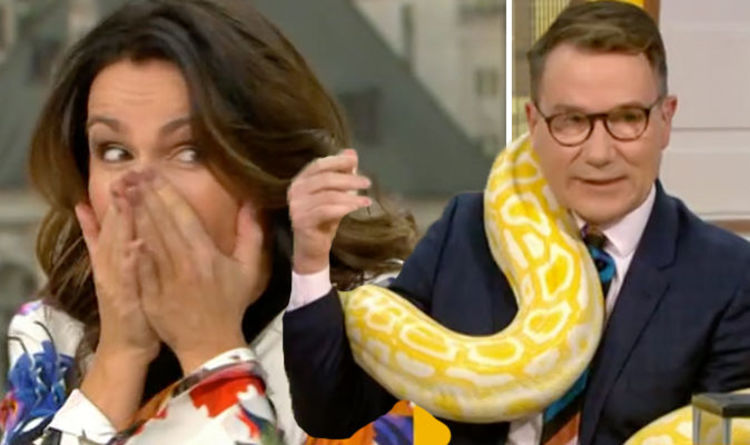 Good morning, Britain, presenters Susanna Reid and Pierce Morgan were ready to discuss the latest series of “I am a celebrity” … Get me out of here! at ITV studio this morning.

The reboot revealed that The Morning was taking Holly Willoughby, taking the reins from Ant McPartlin along with his beloved Jordie Deklenom Donnelly this year.

This week, I already saw that Inbetweeners star Emily Atack took on Bushtucker's first test at a popular reality contest where she had to endure 50 snakes from the jungle that slide all over her body.

In honor of the valiant efforts of hope – she won only one star for the camps – Good morning, Britain decided to see how Pierce and Suzanne can cope with a softer version.

Entertainment reporter Richard Arnold also joined in this action and even put a large python around his neck.

Hilarious scenes followed as Susanna struggled with visitors, and Pierce simply laughed at the events unfolding.

“I have to deal with snakes on this table,” she mourned embarrassedly. "I am not afraid of snakes, but I do not need that near me."

Throwing her hands in her face, the journalist clearly had enough reptiles.

“This is confusing,” she admitted, as others joked that she was approaching her.

Things have become even more strange turn, when a large snake began to wade through the rest of the body of Richard.

“It goes up on your trousers,” comrade presenter Kate Garraway said in horror. “It looks wrong. Oh no!"

“Honestly, you think you buy me a drink first,” said Richard, clearly not knowing the creatures.

“Good morning” Britain spends weekdays at 6 am on ITV.