Archaeologists dig up children who were buried 2,000 years ago in helmets made from the skulls of other dead children to protect them in the afterlife

Archaeologists have discovered 11 graves in South America, two of which were babies with “helmets” made from the skulls of other children.

Researchers suggest that helmets could be used to protect children from “pre-social and wild souls” as they set off for the afterlife.

The team also suggested that they might be part of a ritual response to a volcanic eruption that occurred shortly before they were buried.

The discovery was made at a burial site called Salango, on the coast of central Ecuador, Livescience reports.

Scroll down for the video. 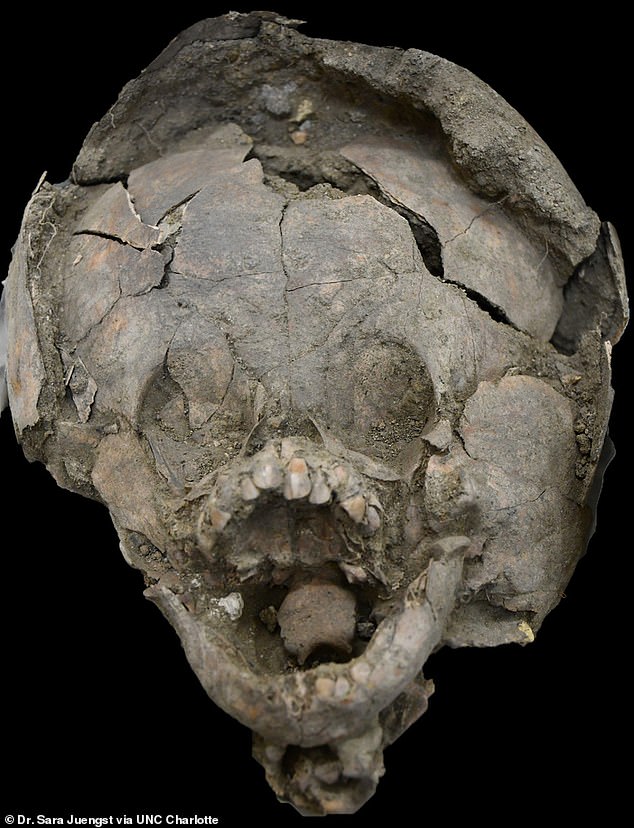 Archaeologists have discovered 11 graves in South America, two of which were babies with helmets made from the skulls of other children.

“The human head has been a powerful symbol for many South American cultures. A published study says that isolated heads representing captured enemies, revered people, and symbolic “seeds” are often included in morgue contexts.

“In Salango, a ritual complex on the central coast of Ecuador, two mounds dating to around 100 BC were discovered as a result of excavations.”

“Among 11 identified burials, two babies were buried in helmets made from the skull vaults of other minors.

"Additional skulls were placed around the heads of the primary burial, probably during the burial." 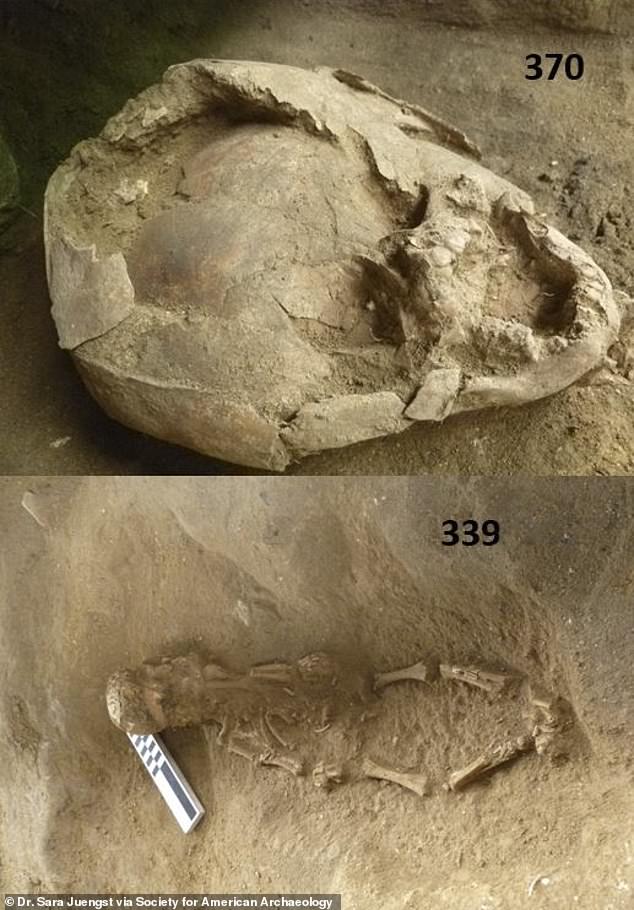 "All skulls were found to be damaged due to physical stress."

Although researchers have theories about what could kill children, the exact cause is still unknown.

However, the team suspects that this is due to the eruption of the volcano, which occurred shortly before the babies were buried.

They could die from a lack of food, as the ashes from the eruption could affect food production in the area, and children could starve.

Another assumption is that the children were part of a “ritual response to the environmental consequences of the eruption,” wrote archaeologists who, according to the team, could have caused death. 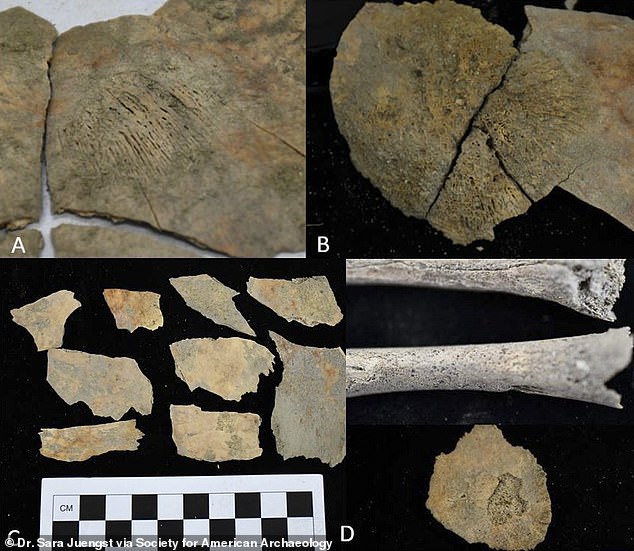 Lesions were found on the remains of both infants (a and d), which suggests that the child suffered some kind of physical activity. Experts suggest that they may have been sacrificed or suffered from malnutrition

One of the babies died at the age of 18 months and was buried in a helmet, which, according to the group, came from the skull of a child aged 4 to 12 years.

The second infant was six to nine months old at the time of death, and was found in a skull helmet made by another man who died between the ages of two and 12.

A group of researchers hopes the ongoing DNA and isotope analysis will confirm whether babies and those children who became “skull helmets” were connected, but in their article they say that there are various possibilities for the origin of the skulls, but they think that burials are evidence of ancient traditions associated with the ideas of "rebirth".

WHY ANCIENT SOUTH AMERICAN CULTURES OF VICTIMS TO THEIR CHILDREN?

Child sacrifice, apparently, was a fairly common occurrence in the cultures of ancient Peru, including the pre-Incan Sikan or Lambay culture and followers of the Chimu, as well as the Incas themselves.

Among the discoveries revealing this ritual behavior are the mummified remains of a child’s body, discovered in 1985 by a group of climbers.

The remains were discovered at an altitude of 17,388 feet (5300 meters) on the southwest ridge of Mount Cerro Aconcagua in the Argentine province of Mendoza. 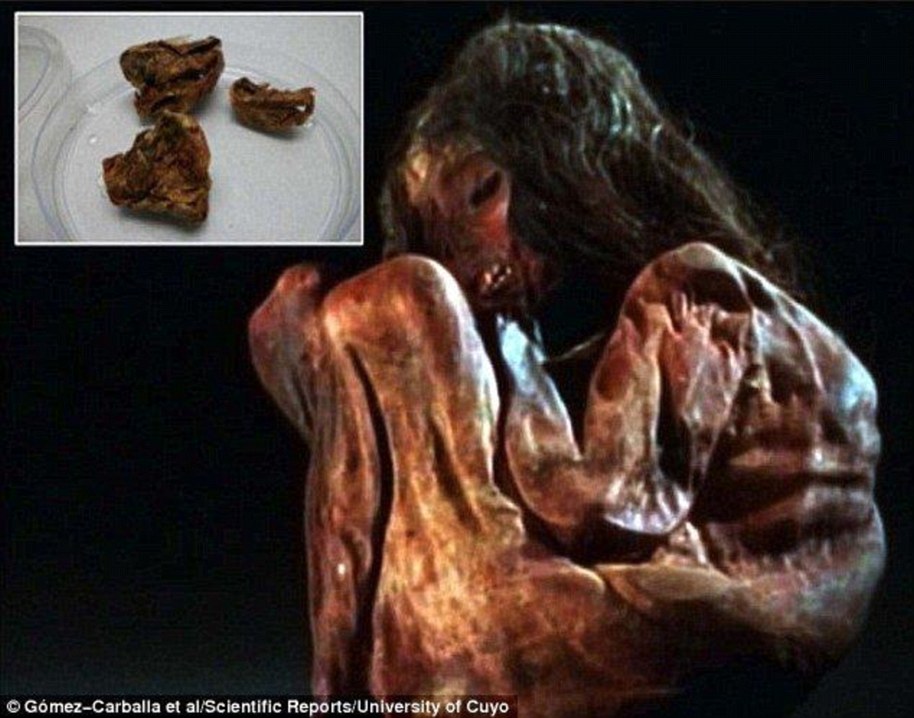 Child sacrifice seems to have been quite common in the cultures of ancient Peru. Among the finds revealing this ritual behavior were the mummified remains of a child’s body (pictured), discovered in 1985 by a group of climbers.

It is believed that the boy became a victim of the Inca ritual called "kapchocha", where children of great beauty and health were sacrificed when they gave them drugs and delivered them to the mountains to freeze to death.

The ruins of the sanctuary used by the Incas to sacrifice children to their gods were discoveredrchaeologists in the coastal ruin complex in Peru in 2016.

Experts digging Chotuna-Chornankap in northern Lima have discovered 17 graves dating from at least the 15th century. This included the graves of six children, placed side by side in pairs of shallow graves.

Kapakocha was the ritual that most often occurred after the death of the Inca king. Local lords were required to choose perfect children representing the ideal of human perfection. 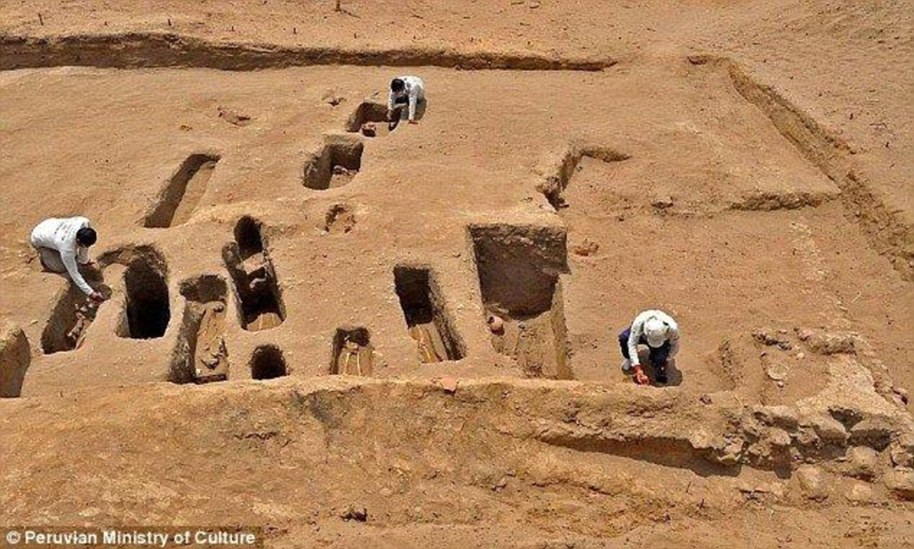 The ruins of a sanctuary used by the Incas to sacrifice children to their gods were discovered by archaeologists in a coastal ruin complex in Peru in 2016. Experts digging Chotuna-Chornankap (pictured) in the northern part of Lima, discovered 17 graves dating from at least the 15th century

The children were married and received as a gift sets of miniature figures of a man and a llama made of gold, silver, copper and shells. Male figures have elongated earlobes and a woven bandage on their heads, while female figurines wore pigtailed hair.

The children were then returned to their original communities, where they were honored before being sacrificed to the mountain gods on the volcano Llullaillaco.

The phrase Capacocha has been translated to mean "solemn sacrifice" or "royal duty."

The rationale for this type of sacrificial rite is usually understood as the celebration of the important life events of the Inca emperor, to send them along with the deities after their death, stop natural disasters, encourage crop growth or hold religious ceremonies.