Discovery of a strange planet with three suns 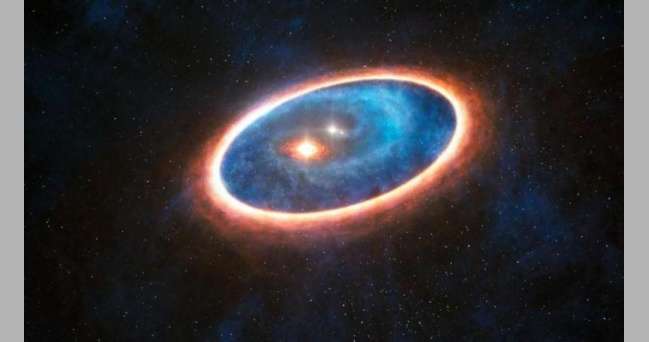 Astronomers recently confirmed the existence of a gas giant planet orbiting a star in a triple star system in a system 1,800 light years away.

Called KOI-5, the system is located in the constellation Cygnus, and the existence of an extrasolar planet was confirmed more than a decade after it was first detected by the Kepler space telescope.

In fact, this planet – now known as KOI-5Ab – was the second candidate for Kepler’s exoplanet detection when it began operations in 2009, according to ScienceAlert.

Astronomer David Shardy of NASA’s Institute for Exoplanet Science said: “The KOI-5Ab was dropped because it was difficult and we had thousands of candidates. There were simpler options than KOI-5Ab, and every day we learned something new from Kepler, so we forgot basically KOI-5. “

As a result, little is known about the properties of exoplanets in multi-star systems compared to exoplanets orbiting a single star.

After Kepler’s discovery, Chardy and other astronomers used ground-based telescopes such as the Palomar Observatory, Keck Observatory, and Gemini North Telescope to study the system.

By 2014, they had identified two companion stars, KOI-5B and KOI-5C. Because of this, it was extremely difficult to tell if the drop in the brightness of starlight observed by Kepler was caused by an exoplanet or something else.

And in 2018, TESS took over the mission, and when he looked at Cygnus, he also put pressure on a candidate exoplanet orbiting KOI-5A.

“I told myself that I remember this goal. But we still cannot determine if the planet is real or if the light in the data comes from another star in the system – it could be the fourth star, ”Chardy said.

He and his team proceeded to reanalyze all previous data.

As an excellent proof of our telescopes’ ability to hunt for planets, the researchers found that yes, the exoplanet does exist in orbit around KOI-5A at an oblique angle to at least one of the stars in the triple system.

“We don’t know many planets in triple star systems,” Chardy said. “This planet is very special because its orbit is distorted.”

Scientists were able to confirm that the planet KOI-5Ab is possibly a gas giant that is about half the mass of Saturn and 7 times the size of Earth and is in a very close five-day orbit around KOI-5A.

KOI-5A and KOI-5B form a relatively close binary system with an orbital period of about 30 years. The third star, KOI-5C, orbits the duo at a much greater distance with a period of about 400 years, slightly longer than Pluto’s 248-year orbit.

So, if you could handle KOI-5Ab, KOI-5A would dominate the sky. And KOI-5C will look like a super bright star. The KOI-5Ab orbiter is not parallel to the KOI-5B, which is interesting.

And if all the bodies were formed from the same rotating disk of matter, then they should be aligned to some extent in the same plane as the planets of the solar system around the equator of the Sun.

The researchers believe that KOI-5B may have disrupted the exoplanet’s gravitational pull, causing it to move during the planet’s formation. And we have seen other evidence that this could have happened.

The three-star system was discovered last year across a very shaky planetary disk. And any planets that form in them are likely to end up in very strange orbits. So, while we’re not sure if there are many exoplanets in triple star systems, finding more will help astronomers simulate these processes and learn about land dynamics.

“We still have many questions about how and when planets can form in multi-star systems, and how their properties compare to planets in single-star systems. By studying this system in more detail, we could understand how the universe was created, ”said Chardy. Planets “.

The discovery was announced at the 237th meeting of the American Astronomical Society.