10 benefits of driving the cars of the future – economy – cars 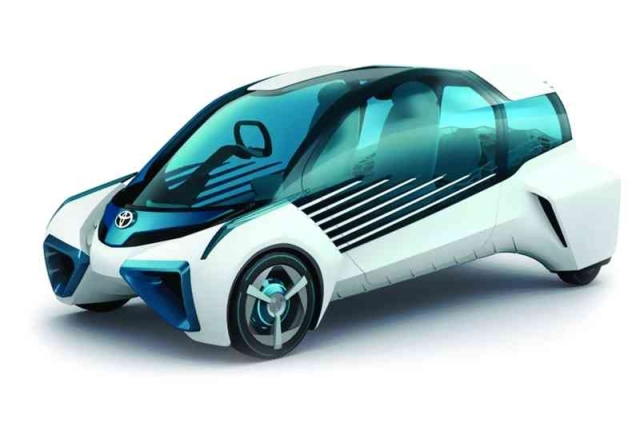 Executives from major UAE car companies have confirmed that technology will drive the cars of the future that will act like “smartphones that go on wheels.” As it will be equipped with hundreds of microcomputers, the industry is on the cusp of revolutionary changes unseen in over a century.

They said that there are 10 advantages that will drive the cars of the future, namely: having a large database, endless entertainment, a complete end to the era of keys, widespread use of artificial intelligence, the introduction of fifth-generation technologies, touchscreens are everywhere and voice assistant for order fulfillment. … Modern navigation systems, constant internet connection and many cameras to replace mirrors.

The Economic Statement examined the views of managers of major car companies in the UAE on what the cars of the future will look like, as they confirmed they will include large infotainment systems as they are likely to include an infotainment system that larger and more accurate than anything we see now, allowing us to work or watch something on the way to our destination. They predicted that there would be no keys by 2025 and that the journey would depend on driver recognition as soon as he approaches him through fully digital 3D interfaces that perform these tasks.

Managers indicated that the automotive industry will benefit in the future from tremendous advances in amazing technologies the world is now experiencing, such as fifth-generation technology and modern touch screens instead of buttons and switches. Even the idea of ​​communicating with cars will be realized through a personal assistant in the form of a “hologram”. With the help of which the driver can request several services, the use of navigation systems to direct the car to the desired point will be carried out using systems displayed on the glass of the front windows, which are constantly connected to the Internet and provide navigation information not only on the shortest and least congested roads, but and to communication systems. Road navigation and suspension for a smooth ride that eliminates potholes and shock from impacts to the interior.

Michel Ayat, CEO of the Arab Automobile Company, said technological transformation will be a major player in the sector in the coming years. For 50 years, the automotive market has been a traditional market in the buying and selling process, but in the next five years the market will witness a radical transformation. He has not seen him for half a century.

He added: Now the buyer does not need to go to the car dealership to find the car he wants, and he just needs to click on the phone or on the computer to find out everything about the car he wants to buy, its characteristics and price, without having to visit the car dealership except to try it out before purchasing. Before that, he had already made a decision. Proof of this is that the number of visitors to car dealerships has decreased by 50%, and in the coming years, the automotive world will see major changes that we have not seen before.

He added that technological developments have impacted the automotive sector as well as other sectors, as we find that modern cars now rely on artificial intelligence, connect the driver with everything around him, and explore the possibility of seeing everything in 360 degrees.

In addition, technological development has made the car connected with other cars or its service centers to know everything about the car, as well as the amazing and accelerating trend in the electric and self-driving car industry.

“City of the future”

Vincent Wienen, Senior Managing Director, UAE Market at Al-Futtaim Motors, said: Toyota Motor across all its divisions, including Lexus, is working on plans to create a “City of the Future” where it will test a variety of new vehicles and artificial intelligence technologies such as like robots. And autonomous mobility and smart homes on earth. The ambitious project, dubbed “Woven City”, is set to start next year.

Victor Dalmau, Volkswagen’s CEO for the Middle East, said the automotive industry will grow rapidly in the coming years. The market has become more competitive than ever before, and the new norm has presented the global economy with problems of shrinking consumer demand and indescribable changes. Leads to consumer behavior. These factors have had an exceptional impact on the auto industry, prompting all auto companies to rethink their business operations.

He added: “For our part, Volkswagen will remain committed to our digital strategy, with a focus on quality and simplicity as the main characteristics that our products deliver to customers. This strategy will strengthen our brand and lead to the premium segment in terms of sales in the region.

Managers have categorized cars into 4 types: hybrid, electric, self-driving, and airplanes, sparking a frantic race among the world’s auto industry leaders for leadership in any or all of them to capture the lion’s share of future car sales.

They said development began with hybrid cars, which combine internal combustion and having a battery that helps each other, but managers expected them to disappear due to the trend towards all-electric cars, whose technologies are showing amazing progress and in which such large players like the American company Tesla. Reports from the International Energy Agency showed that by the end of 2020, the number of hybrid vehicles had reached about 6 million vehicles worldwide.

Managers said the second type of car of the future is electric, which big companies are currently working on. They explained that by the end of 2020, sales of electric vehicles worldwide had grown to about 2.3 million vehicles, up 22% from 1.76 million vehicles in the same period last year.

Bloomberg New Energy Finance also predicts that by 2040, electric vehicles will account for about 33% of the world’s total vehicle fleet and 55% of all new car sales.

Executives saw the electric vehicle industry face a number of hurdles to accelerate its pace of development, chief among which is ensuring reliable battery charging and dedicated power stations.

And they said that despite the growing demand for the idea of ​​owning electric vehicles in different segments around the world, battery capacity is still a factor of concern to anyone looking to own this type of car, and there is another big issue related to the duration. charge of the car battery itself, which still remains. This takes time, which is not commensurate with the speed required to perform all types of work on the basis of the car.

Another negative reason is the lack of car charging centers. Another problem is the high prices, as these cars are still more expensive than those that run on regular fuel.

“We want our products to create a unique and natural experience that allows them to enhance our customers’ daily lives,” said Karim Habib, senior vice president and head of Kia’s global design center. Our goal is to create a unique physical presence for our brand in order to create original, innovative and exciting electric vehicles.

As for the third type of vehicle, these are self-driving cars, as some used to see it as a kind of imagination that you see a car driving down the street without any human intervention, but thanks to the tireless efforts being made in this area, it is now closer to us than ever.

Large companies around the world have entered the pilot phase of self-driving car technology, and the automotive world has invaded the world of roadside assistance technologies, such as active cruise control, which can control traffic in front of the car and adjust the speed and stop if necessary, and also lane control technology on the road to prevent deviation. The vehicle is out of the lane in which it is moving, systems for monitoring road signs on the roads and determining the maximum and minimum speed and other technologies.

Some believe that one of the benefits of self-driving cars is safety, according to statistics, more than 1.3 million people die annually from road accidents, and 94% of these accidents are caused by human error, since the car can make the right decisions according to the data. which it receives from the weather and the road from It is not influenced by factors such as fatigue or drowsiness that can affect a person while driving.

But the problem of adoption and adoption of such technology by users remains the biggest problem, as it is difficult to convince users to leave the steering wheel and go to the computer that controls the car and get to the specified destination, according to statistics, we find that 45% of car drivers give up self-driving their car, while Only 15% would like to switch to an unmanned vehicle.

Flying cars used to be science fiction, but now they have become a reality, after many aircraft were already developed, ranging from personal aircraft devices or so-called “jetpacks” to flying taxis.

Advances in battery capacity expansion, materials science and computer modeling have paved the way for the development of a range of aircraft, from electric gliders to fixed-wing aircraft and drones to quadcopters.

Most aircraft have propellers instead of wings, allowing them to take off and land vertically. Tilting propellers improve long-range flight efficiency, and multi-propeller aircraft are designed to reduce flight noise. Most importantly, these cars are faster than traditional vehicles, especially in crowded cities.

Dozens of startups are now competing to develop jetpacks, flying motorcycles, and personal jet taxis for personal aviation. Airlines, car manufacturers, investors and financiers are looking for a foothold in this market, which is expected to be worth nearly $ 1.5 trillion by 2040. 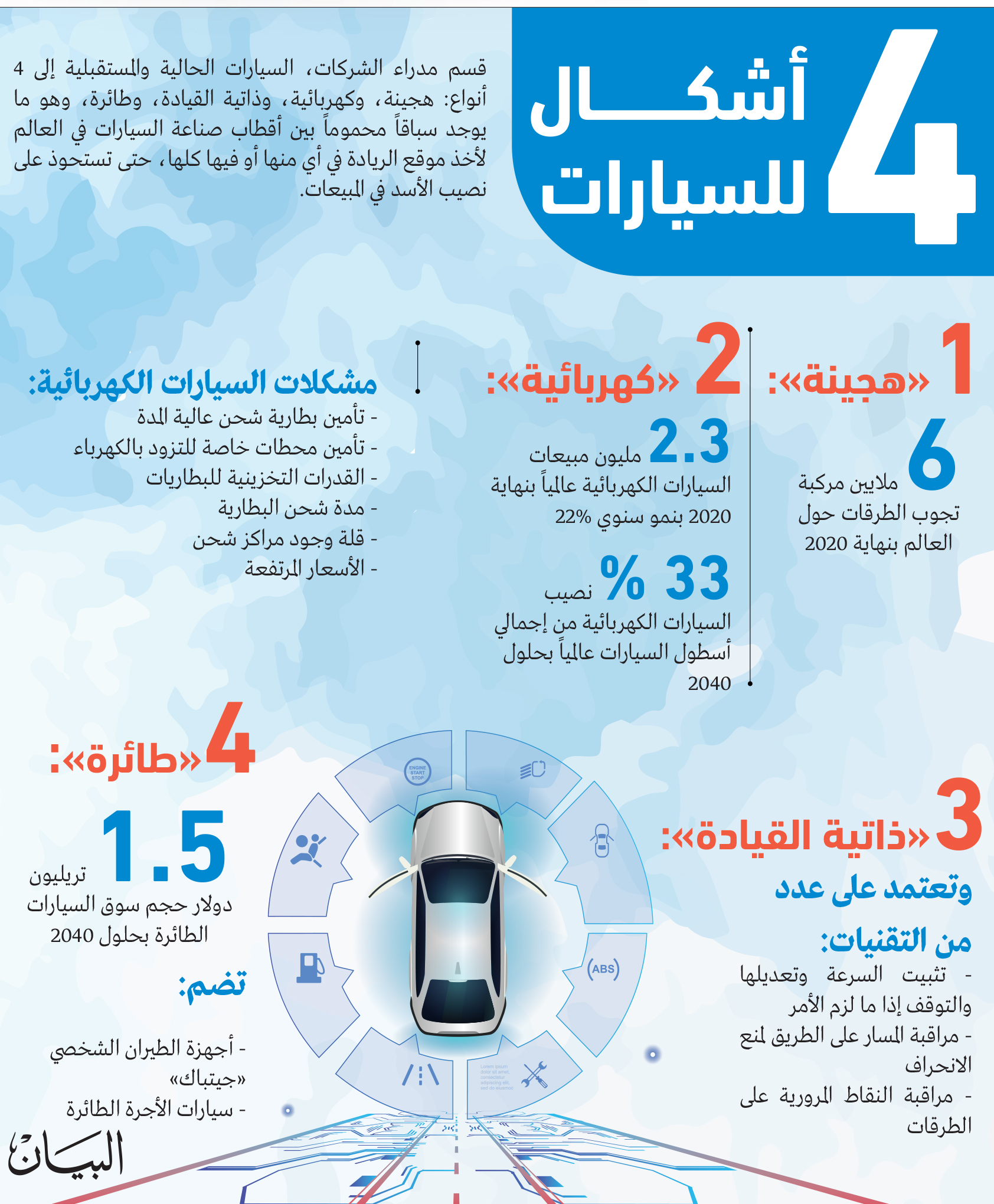 Ministry of Health recorded 3,072 new cases of coronavirus – local – other

The United Nations confirms that it has received no evidence that Sheikh Latifa is alive. Arab and international news

In the video, Mohamed Salah is angry with his coach after his change … and Klopp reveals the reason – Arab and international sports.