Bad weather, anxiety all over Italy. The first snow in Val d'Aosta 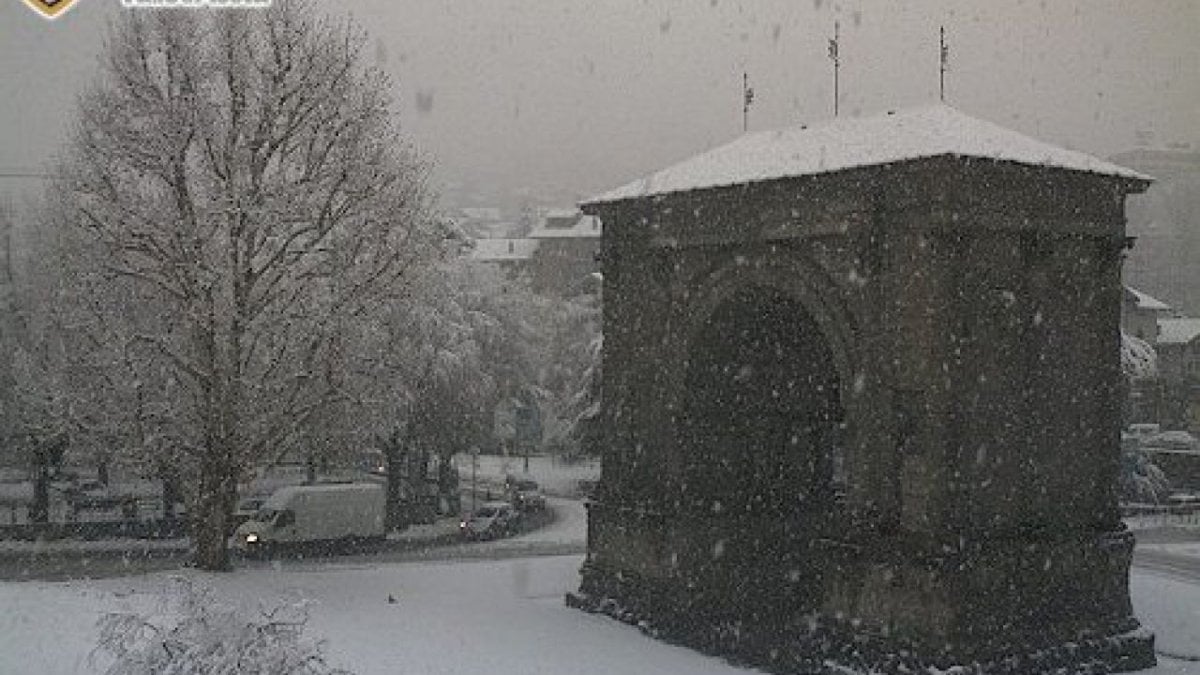 ROME – Bad weather is back. In a few hours, a cyclonic whirlwind of Atlantic origin will reach Sardinia and the Tyrrhenian Sea, which will worsen the weather throughout Italy. The cold air in the Alps led to a light snowfall in Valle d'Aosta, even at low altitude: some braces also fell today in Aosta. The maximum expected amount of water in 2000 m is 5-10 centimeters, especially in the lower part of the valley and at the border with Switzerland.
chronicle

Weather, winter is coming: from Monday snow on the plains to the north

Three Venetian climbers yesterday blocked Sima Strugova, where the temperature reached -10, the height of the Mangart group in the Western Julian Alps. At the site, the station Caves del Predil alpine and speleological rescue intervenes, which was in contact with three overnight through a mobile phone, investigating the situation every half hour. Yesterday the first attempt was made to get to them, passing through the Slovenian side and Brussettini bivouac, but then the strategy changed. The helicopter cannot be used due to low visibility, it is also snowing.

With the latest bulletin issued by the Regional Civil Protection, the level of criticality goes from ordinary (yellow) to moderate (orange) from the south to the north of the island. Hydrogeological risk due to precipitation also of a temporary nature will begin from the early hours of today on Monday 19 (from 3 am) and last until midnight. In particular, the areas affected by this new warning are Iglesiente, Campidano, Montevecchio Pishilppiu, Tirso, Gallura and Logudoro. At the same time, the yellow warning is extended until midnight on Monday, in the territory of Flumendos-Flumindu, in the south-east of Sardinia. Storm winds and storms in Sardinia are expected, starting in the second half of the day in Umbria, Lazio, Abruzzo and Molise, especially in the western sectors. Phenomena will be accompanied by strong intensities, frequent electrical actions and strong gusts of wind. From early morning, strong winds or storms with gusts of violent storms occur today, from the southern quadrants in Sardinia, Lazio and Sicily to Calabria, Basilicata, Apulia, and in the evening from the east dials to the coast of Emilia-Romagna, with possible storms along the exposed shores.

Today, schools will remain closed in Sassari and Alghero. The sacraments were signed by the mayors Nikola Sano and Mario Bruno in connection with the warning of adverse meteorological conditions with an orange code branched out for the decentralized Functional Center for Civil Protection of the Sardinia region. On the other hand, in Cagliari, the municipality asks “to pay the closest attention to the impact of containers designed to collect waste”.

Forecasts and tides of the city of Venice are predicted tomorrow, Tuesday, November 20, at 8:45, the maximum tidal tip of 125 cm in Venice, with the possibility of an increase of 10 cm in Chioggia due to the strong Bora wind. The cold air, which since Saturday affects northern Italy, as stated by Centro Tempo dell Ar Arpa Veneto, "only on Monday, arriving in Germany and France, will deepen and will be accompanied by a drop in pressure even to the ground."

This disturbance is expected to cause an Sirocco in the middle and lower Adriatic, leaving strong Bora winds in the northern part and in Venice. The juxtaposition of these two elements is historically called "confrontation." Centro Maree remembers that the tides of 125 cm are associated with flooding of about 37% of the city. The areas most affected by this phenomenon will be the lowest, namely Piazza San Marco and Rialto. Centro Maree also remembers that with strong winds it is possible to create local accumulations of water in areas under the wind, which leads to an increase in tidal levels in limited areas of the city, even by a few centimeters from the average city level.


We are not a party, we do not achieve consensus, we do not receive government funding, but we constantly thank readers who buy us every morning at newsstands, look at our website or subscribe to Rep :.
If you are interested in continuing to listen to another call, perhaps imperfect and some annoying days, continue to do so with confidence.

from our correspondent GIAMPAOLO VISETTI

Lombardi ended up in the red zone due to one of his mistakes. Fontana blames Rome, the ISS misleads him: he sent incorrect data, and then corrected them

Barbara D’Urso, communication accident. The incredible happens behind the guest’s back: “It’s disgusting.”

At Stadio delle Palme, an illegal veranda used as a gym: “It will be demolished soon”