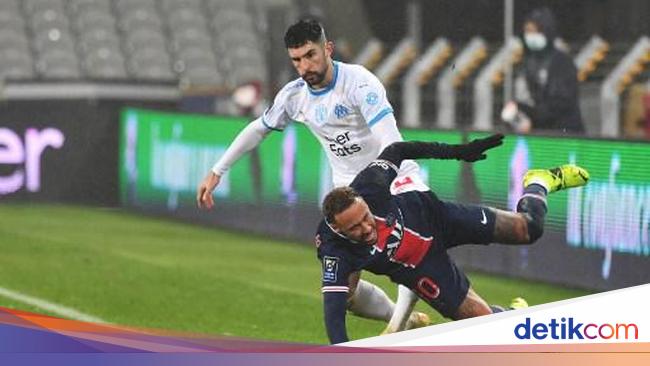 The second volume of Neymar versus Alvaro Gonzalez brightened the match between Paris Saint-Germain versus Olympique de Marseille. Gonzalez’s rough play was met with derision by Neymar.

PSG met with Marseilles at the Bollart-Delelis stadium as part of the Champions Trophies tournament on Thursday (01.14.2021) WIB morning. This duel, called Les Classique, was won by PSG 2: 1.

Les Parisiens won the Champions Trophies thanks to goals from Mauro Icardi and a penalty kick from Neymar. Meanwhile, Marcel was only able to answer through Demetrius Payet.

The Le Classique duel should be hot and fast. This match was also once again decorated with a feud between Neymar and Gonzalez.

In the previous Le Classique match, the two players became the protagonists of the drama, pitting each other between players at the last minute. Neymar was seen hitting Gonzalez in the head.

The Brazilian player said his shameful act was caused by Gonzalez’s racist insults. However, following an investigation by the Ligue de Football Professionnel (LFP), Neymar’s claims have not been proven.

The rivalry between Neymar and Alvaro Gonzalez continues to this day. The second volume of Neymar against Gonzalez began in the 65th minute, when Neymar entered the field to replace Angel Di Maria.

Gonzalez received a yellow card when he appeared to nudge Neymar with his head while running. Neymar did not remain silent about the actions of Gonzalez.

He then responded after scoring a goal with a celebration of taunts at Gonzalez. Neymar versus Gonzalez did not stop, although the match was over.

After the match, Neymar uploaded a photo of him celebrating by making fun of Gonzalez on his Twitter account. Gonzalez responded to this tweet by posting a photo of him violating Neymar.

In his download, a former Espanyol player wrote: “My parents always taught me to take out the trash. Allez L’OM toujours “. After that, two of them were involved Twitter.

“And he forgot how he got it,” Neymar replied. Gonzalez then added a photo of Brazilian legend Pele holding three world championships together. heading “Eternal Shadow of the King”.