Blocking: when and how store measures will be relaxed 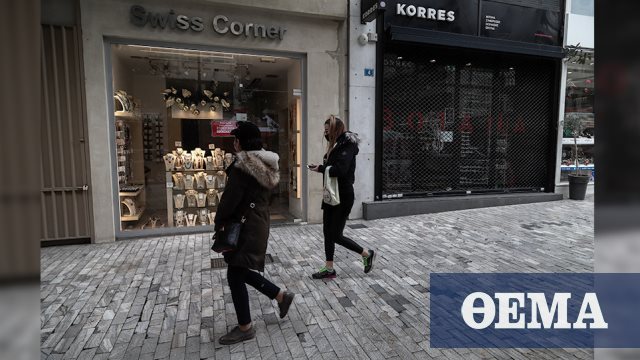 Climate in her favor resumption of retail in the last hours in the ranks of experts, upon the decision of the Commission tomorrow is friday for rest or not restrictive measures –and this despite concerns about Attica and an increase in cases between the ages of 35 and 54.…

With young students returning to class without much trouble, retail store openings are gaining momentum, only scenarios that seem to have been worked out by the government apparatus. they are not one-dimensional…

On the other hand, with a reference point coming Monday, January 18 proposed:

on the one hand, an operation with click in store method (getting inside) stores:

where the buyer will arrive at the store by appointment, which he will be informed about by phone or text message about the day and time of arrival. In addition, a list of daily appointments will be posted at the store entrance.

Usually, that is, complying with existing restrictive measures and by appointment, will be open next Monday:

while with the now famous click method (receipt outside) will work:

· All other commercial stores as they were before January 2, with the exception of clothing, footwear and jewelry stores.

Their work is added to the new commercial reality. shopping centers, where, on the one hand, there will be the possibility of collecting inside indoor stores, as well as collecting outside of all other codes, except for clothing, footwear and jewelry stores.

How they will work is still in question bookstores, that is, will they return to the “freedom” regime, which was in effect until January 2, and what exactly will happen with the sale of products – in addition to consumables – in supermarkets, given the reopening of almost all retail.

Anyway dominance of retail over education in Friday meeting in terms of infectious diseases, it is the peak of human training in the market, as this development is confirmed by current epidemiological data. “I am not the one who will ultimately tell the Commission what to decide. I will only say that the epidemiological data is much better at the moment than it was on December 15 when we decided to open it with a click.” the prime minister said in an interview with ANT1: Kyriakos Mitsotakis, noting, however, that the decision remains with the experts. For his part, Deputy Minister of Development, Nikos Papatanasis yesterday explained how “In the Ministry of Development, we, in fact, have the measures and rules that we propose to the committee so that the committee can make its decision, since it has a model. In this model, he invests the mobility that everything creates.The experts evaluate each time based on the critical mobility variable.

In this regard, “Whether we open retail or other levels of education (…) Everything we do is risky and any offer we make can be canceled if the epidemiological data deteriorates.” emphasized the professor of infectious diseases, Nikos Sipsas. In a conversation with SKAI, the professor warned that “The central sector of Athens is epidemiologically in” orange “, but close to red”, an event that could indicate that more action is being taken.

Regarding the next step by the experts, Mr Sipsas explained that the Commission will rule in favor of either the retailer or Secondary education, but by no means simultaneously. “There is a possibility that retail opening will affect school activities. We know that the spread of the epidemic in schools is directly affected by movement outside the school. Everything is interconnected. Nobody’s in a bowl or bubble “, concluded.

At the same time, scientists are seriously concerned about the worsening epidemiological picture in some parts of the country, which were put on “red” alarm. According to Minister of Health Vasilis Kikilias, concentrations of high viral load have been observed over the past seven days:

· In the Rhodope Mountains,

With this data, “The red zones will remain in the open, in areas with a high epidemiological load, we cannot have population mobility, which means dispersal, i.e. pressure on SNB “ – pointed out Professor Sipsas, with the exception of schools. However, regarding the alarming facts, the Minister of Health Vasilis Kikilias Yesterday they included the fact that the average age of confirmed cases in the country is 46 years, and also highlighted that “over the past 15 days, we have seen an increase in cases in the 35-54 age group”, sounding the compliance alarm. social distance.

Although experts are taking a breather before easing restrictive measures due to Friday – at least for the market – in a state of total lockdown, Argolis and Sparta, until 6am next Monday. In the meantime, the following applies:

· Prohibition of movement outside PE Argolis and the municipality of Sparta, except for travel for health reasons.

· From 18:00 to 05:00 a ban on the movement of citizens within the P.P. Argolis and the municipality of Sparta, with the exception of employees who can only move from home to work and vice versa with the exclusive permission of their employer.

In addition, the extension of the restrictive measures was announced last night by the General Secretariat of Civil Protection of the Community of Spurciada, Makrakomi Municipality, Phthiotida… The extension is valid from today at 6 a.m. until the same time on Monday, January 18, with the following provided:

Ban on movement outside the Sparkiada Community, except for health reasons

From From 18:00 to 05:00 Prohibition of any movement of citizens within the Community, with the exception of workers who can only move from home to work and vice versa with the sole permission of their employer.

Thessaloniki: Clash of foreigners in the center – two extraditions (video)

USA: Biden’s priority is his program, not the Trump trial

See all the latest news from Greece and the world as they appear on Protothema.gr