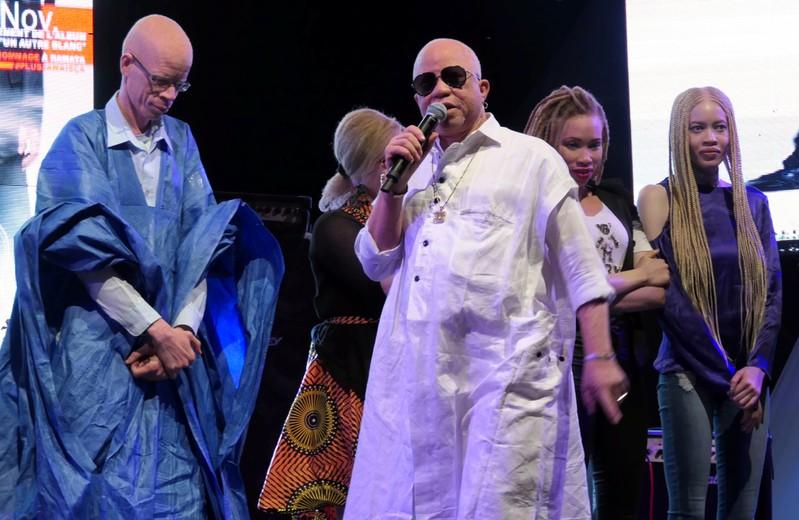 BAMAKO / DAKAR (Reuters). Like many people, the Malian musician Salif Keita first realized that he was different when he started school. His skin was white; all other children were black.

Malian musician Salif Keita performs during a concert to promote tolerance and recalls Ramat Diarra, an albino girl who was abducted and brutally murdered this year in Fana, Mali on November 17, 2018. REUTERS / Mustapha Diallo

“I was the only albino,” he said in an interview with Reuters. "I immediately realized that I was different from other children."

In Africa, skin condition — where people are born without pigment in their skin, eyes, and hair — is often seen as an omen of unhappiness. Albinos were shunned, ostracized, beaten, killed, and dismembered in some places, so their body parts could be used for magic potions.

But when the 5-year-old albino girl Ramata Diarra was ritually murdered and beheaded in the Malian city of Fana, 130 km west of the capital Bamako, in May of this year, Keita decided to act.

“I was really shocked,” he told Reuters before heading to Phanu on Saturday as a tribute to Ramat.

“Albins have problems with integration into society, which we want to expose,” he said. “We say that beauty lies in the difference. We should be proud of what we are.

His new album, Un Autre Blanc, or Another White, the last one, preceding 69-year-old retirees, is dedicated to underlining this message.

For decades, the sound of Keita – hip-quivering, but curious, obsessive combination of Mandinka's folk music with percussion jazz-funk – has fascinated the West African and Western audiences.

The new album is more eclectic than the past, featuring such diverse guests as French rapper IHD, Nigerian Afropop singer Yemi Alada and South African choral group Ladysmith Black Mambazo. “It was my way of saying goodbye to my friends,” he told Reuters.

At the Saturday concert, Fana’s football stadium was filled with revelers with slogans such as “never again” and “I am Ramada”. Albino danced alongside everyone else.

“She was still not old enough for school,” Mother Hava Toure told Ramate, breathing in tears, reports Reuters. "I will always have such pain in me."

But she hoped that the concert would help to cope with ignorance.

“If everyone agrees to see albinos as humans, it becomes a fact,” said Torah. "Salif's concert is a cry from the heart to hear the mind."

Researchers are identifying genetic risk factors that contribute to the susceptibility to pneumonia and its severity.