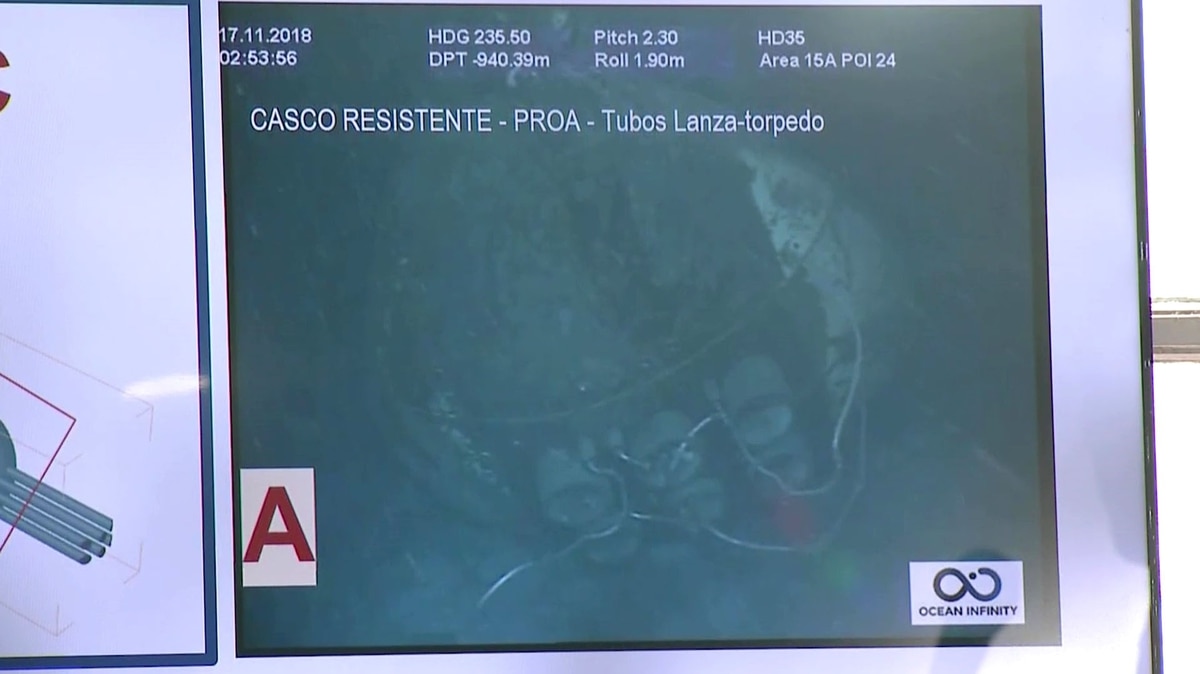 "Hydrographic mapping" will be the original key to preliminarily determine the reasons why the submarine ARA San Juan sank on November 15, 2017. The Navy and Department of Defense authorities expect an innovation from Ocean Infinity, which was responsible for finding a ship with 44 crew members of the Argentine navy.

After confirming the detection of the submarine ARA San Juan at a depth of 907 meters and 500 kilometers off the coast of Comodoro Rivadavia in the Argentine Sea, first images that they were sent both to Judge Kaleta Olivia and to the Ministry of Defense; they appear sail, bow and feed of the ARA San Juan.

However, qualified sources from the Navy and the Ministry of Defense confirmed Infobae what now it will be "Key and fundamental for hydrographic mapping" where the submarine was discovered, determine if the hull was damaged, or if other fragments of the ship were scattered around the ARA.

Chief of the Navy, Vice Admiral Juan Jose Viljan, and former representative of the Force, captain Enrique Balbi confirmed that visibility is in place "rather diminished, which was difficult due to turbulence and salinity, which is at this depth, the reason why she is still trying to get more accurate images using AUV and ROV (unmanned underwater vehicles), which work from the vessel Seabed Constructor".

Information on the complete hydrographic mapping of this place will be simultaneously delivered by Ocean Infinity to both justice and the navy.

"The display of this place will give more evidence and draw conclusions about what happened during the submersion of the submarine"The official said with the Ministry of Defense.

Although it was stated that the American company responsible for the discovery "no legal or contractual obligation“To send this mapping, both in the Navy and in the Ministry of Defense, confirmed that it was all the same.

Aguad stands for greater accuracy in the imagery and research of the area, and then analyzes how to act. However, he explained that this would be the federal judge of Kaleta Olivia, Martha Yanyes, who is in charge of the ARA San Juan case, who will decide at what point the submarine can be removed, if possible, due to the need to perform field studies.

"The majority must be resolved by the Judge and, in addition, there is an internal summary for disciplinary measures conducted by the Ministry and the Navy.“- recalls Aguad, who also announced that next week he will receive a technical report made by three fleet admirals who were commanders of ARA San Juan, who will have technical details designed to know what could have happened to the submarine , to blow up and thereby demarcate duties.

On the other hand, the Minister of Defense said that it is not yet known whether the vessel could be removed from these depths, he added that Argentina does not have the technical means for this, although he confirmed that all possible efforts would be made: “The families of these 44 heroes or patriots “We all need to know what happened, and we will make every effort, this is the presidential order.”

However, from the government and the navy they explained Infobae no refund: "Today it is technically impossible to save a submarine for budgetary and material reasons."

Thus, in consulting sources it is explained that the submarine weighs 1,700 tons, and to save it to the surface, a vessel with a crane capable of supporting this load will be required. No one could give confidence until today if there is any company or army of any country with these capabilities.

In fact, the owner of the defense portfolio recalled that Argentina does not have “AUV (autonomous underwater vehicle), which are state-of-the-art technologies,” and not with a ROV (remotely controlled vehicle) to go down to these depths. ”

Gines Gonzalez Garcia fights back between interns and sparks with Casa Rosada.

“Was that a message?” The former Chiquititas dreamed of Romina Jan, and the story touches the fans.

Coronavirus: delays in vaccinations heighten tensions and frustration in the EU

6 Questions You Need to Know About NASA’s Mars Helicopter That Can Fly to Mars – What to Do About It?

Emiliano Cargieman, king of satellites of Argentina, made an alliance with Elon Musk: what is he about